Don’t have a workout partner to keep you motivated and in the gym? No problem. Just use your smartphone. You’re probably no stranger to fitness apps. They have been around as long as smart phones have. Apps can be great tools for tracking your progress and fitness levels, but have been missing a crucial component: motivation. True motivation. Most fitness apps have some sort of cursory form of motivation, like “cheers” that are broadcast through your social networks, but if you don’t run, there isn’t much of a consequence, at least not through the app.

There are three promising apps that you should definitely check out if you need a little extra boost in the fitness department. They’re called:

How GymPact works. See for yourself if it’s right for you!

GymPact was debuted at the beginning of this year as means to help keep people on track with their New Year’s resolutions (ha!), but has quickly turned into a powerhouse of fitness motivation. The success of GymPact is due to the fact that it motivates its users by hitting a crucial pressure point: their bank accounts. They answer the question: “What’s our strongest motivator?” Money. If you don’t commit to your goals, GymPact will charge you money for your failures. On the other hand, if you meet or exceed your goals, you can get paid extra money through the app.

Here's How It Works:

Here’s a screenshot of their app from the GymPact webpage: 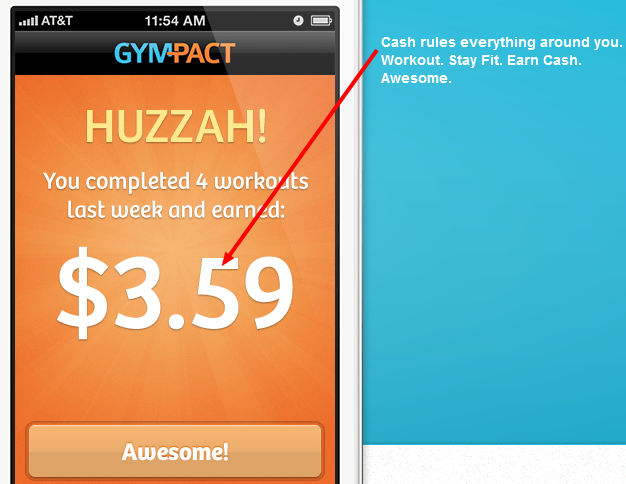 RunKeeper: Can adding runkeeper to the mix keep you on track?

The team at GymPact have teamed up with another app creator: Runkeeper. Runkeeper adds another layer to the motivation onion by keeping you publically responsible for your fitness activities. When you go out for a run or a bike ride, Runkeeper broadcasts your fitness event across your social media streams. It also broadcasts if you don’t make your fitness commitments. Altogether, these two apps hold you financially and publicly accountable for your fitness success.

80Bites: A new type of weight loss program, but can you stomach it?

While these two apps cover your fitness goals, there’s another new one to watch that helps you with your nutritional goals in a pretty non-traditional way, it’s called 80Bites. Led by its snappy “Sam the Stomach” spokesman, 80Bites claims that the path to losing weight is paved by how many bites you take each day. Their philosophy is that if you limit the number of total bites you take each day, then it doesn’t necessarily matter what you’re eating as long as you’re not overeating. Now, that is paraphrasing their mission statement just a bit, since they do eventually encourage their users to eat more healthy foods, but they stress the importance of quantity control over quality control.

The 80Bites app helps you keep track of how many bites you take each day through it’s handy “Bite Pedometer.” As pictured below in a screenshot straight from their website, you use the “Bite Pedometer” by tapping the big blue button after each bite: 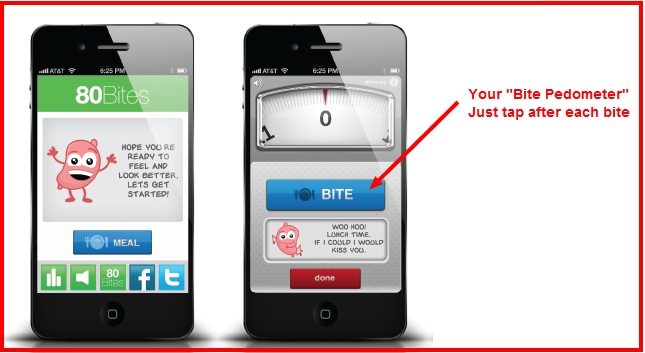 The nice thing is that they have a sophisticated graphing tool that tracks your daily, weekly, and monthly progress. You definitely don’t want that creepy little stomach guy to get mad at you, so it’s important to keep your bites at or under 80 as often as possible.

The 80Bites team seem to be on to something here. Logically, if you eat less food, your stomach gets smaller after time. If you have a smaller stomach, you’re going to be hungry less often, which results in eating fewer calories overall. It does make a certain amount of sense. The app market is so flooded with diet-centric apps, it’s nice to see a weight loss app that focuses on something besides counting calories, or carbs.

Despite what every app developer will tell you, the answer to fitness success may not reside in a single app. By combining these three apps, you can get a whole fitness program that’s greater than the sum of its parts. At the very least, you can earn enough extra money by going to the gym to treat yourself to a nice lobster dinner. Just make sure you don’t go over your bite count.

Wesley Reacher has a B.S. in Kinesiology with a Minor in Sports Medicine. When he's not gunning his lats at the gym or sinking birdies on the frisbee golf course, he's blogging for Weightnot.com, a great resource for healthy weight loss.